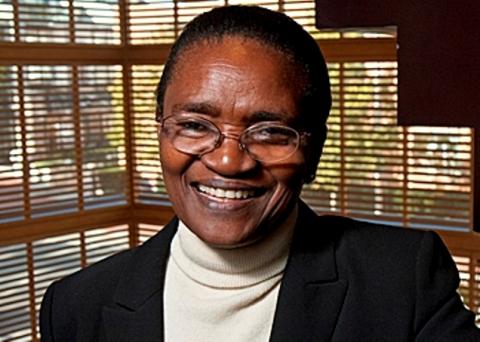 She overcame significant poverty to get an education, and eventually, to become the country’s female medical doctor. Esther traveled to Moscow to do her medical studies in Russian, according to ABC Radio.

Esther was also the first woman in Tanzania to become a medical professor, and the country’s first Vice-Chancellor.

She has played an instrumental role at Hubert Kairuki Memorial University in Tanzania, a medical training college, encouraging others to follow in her footsteps.

Her first job? Mwaikambo was actually an office secretary, at first. That was after she took up a certificate in secretarial courses in Tanzania. To hear her story, click on the website that leads you to the audio here.

She was born in Mwika, Marangu in Kilimanjaro region in 1940. She started her long academic journey in 1948 at the former Lyakirimu primary school, now elevated to a secondary school, according to details on her achievements, published in a TGNP portal.

Dr Mwaikambo still nurses fond memories of her early school life class and mathematics teacher, the late Ernest Mwariki. She grew up with profound interest in the subject and developed deep affection for Mr Mariki who inspired and influenced his pupils to be responsible people through his kindness, humility and kindness.

Dr Mwaikambo performed extremely well in the class four national examinations. Consequently, in 1941, she was selected to join class five at Ashira girls’ secondary school, Marangu. This is the year when hell broke loose on her! Her mother who had been ill for over three years died of an unknown eye complication. Rumours went round that she had been bewitched by a close relative!

Devastated by the untimely death of her mother but driven by the urge to establish the death of her mother at the tender age of ten, Esther vowed to work and study hard in order to find out the truth about her mother’s death. Her determination took to Tabora girls’ secondary school, Tabora in 1955.

At independence, in 1961, Esther was among the people who benefitted from the vast scholarship opportunities to study abroad. She was granted a scholarship to study journalism in

Russia. She was admitted to the State University of Moscow for a one-year pre-university programme during which time the students studied comprehensive Russian language to gain language competence for all programmes.

It was during this time that Esther observed that more than 80% of the doctors in the Soviet Union were women. With this observation, coupled with the desire to find out what caused the death of her mother, Esther decided to request the university administration to allow her to study Medicine instead of journalism.

She was not qualified for admission at the medical school because of reasons including the fact that she had not taken science subjects in her Cambridge school certificate. However, the university administration agreed to allow her change the faculty on condition that she would go back to secondary school to pursue science subjects for two years and if she would pass well, she could then join the medical programme.

This she agreed to happily and was admitted to a Russian secondary school in Moscow where she studied high school science subjects for two years. She passed the necessary examination and in 1965, she was admitted to the Friendship University, Moscow. She completed her medical studies and in 1969, she was awarded a Doctorate degree in Medicine {M.D degree}.

Ever since, she has continued to climb from one academic stair to another. She became the first female Medical Doctor in Tanzania in 1969, the first female pediatrician in 1977, first female professor of Medicine {pediatrics} in 1993, first female University vice chancellor 1999-2006, first female member and vice president of Tanzania Academy of Sciences from 2004. No wonder her friends and colleagues have christened her ‘the woman of many firsts!’

Currently she is employed by the faculty of Medicine as professor of pediatrics and also teaches clinical pediatrics and Child Health in the department of pediatrics. Besides, she is the principal investigator and team leader of the HKMU/UTAH/DUKE Malaria programme.

Throughout this period as she decorated her cap with professional and academic feathers, the world had been watching amusingly from the sidelines.

Consequently, in a rare gesture to recognize and show appreciation for the extraordinary achievements made by an ordinary Tanzanian, Dr Mwaikambo was nominated for the ‘2013 Dr Martin Luther King junior Drum Major for Justice’.

In his remarks, United States Ambassador to Tanzania, Alfonso E. Lenhardt hailed Dr Mwaikambo’s leadership as a pioneer in Tanzania’s medical sector by noting that her childhood experiences taught her the value of perseverance of adversity but most importantly compassion for those forgotten and the needy.

“Those experiences embedded in her soul deep commitment to ensuring that Tanzanian women and girls enjoy their full rights, including receiving access to education and healthcare to reduce preventable deaths……”,the Ambassador observed as he bestowed the award on Dr Mwaikambo in Dar es Salaam recently.

In her acceptance of the award speech, Dr Mwaikambo noted that she was humbled by the great honour.

“I am reliably informed that the award is given to Tanzanians with impeccable credentials, accomplished merits, demonstrated leadership and whose work resemble Dr King’s legacy in non violent struggle for justice. It is with great humility that I accept this award”, she said amid cheers from the attendees.

Dr Mwaikambo urged the Tanzanian citizenry to responsibly build a better fiture for the Tanzanian girl child noting that divisive remarks and actions contrast effort made by Mwalimu Julius K. Nyerere to unite the country and motivate his countrymen and women to fight poverty, ignorance and disease in unison.

The Dr. Martin Luther King Junior Drum Major for Justice is presented annually by the American Ambassador at the Embassy of United States in Tanzania in commemoration of the life and achievements of Dr. King, and of a Tanzanian whose life embodies the work and commitment of Dr King’s life.

Dr Mwaikambo becomes the 13th recipient of the award since it was first bestowed to Hon. Francis Nyalali in 2002. The immediate former recipient of the prestigious award is Retired Chief Justice Augustino Ramadhani [2012].