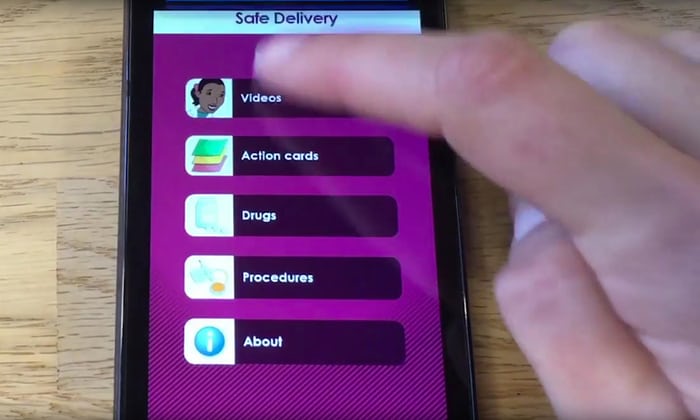 A smartphone application known as the “Safe Delivery App (SDA), has been introduced in Tanzania. It has already been tested in Ethiopia and found to work, see VIDEO here.

When it is rolled out across the country, birth attendants will be able to download the App from Google Play and get all the life-saving skills they need to rescue lives of women during childbirth.

Here in Tanzania, it was launched on Thursday 16th July in Mpwapwa District, Dodoma region.  Ikakara Health Institute (IHI) has provided birth attendants at Mpwapwa health centres in Dodoma, with new smartphones installed with the App.

Donat Shamba, SDA research scientist at Ifakara Health Institute (IHI) said that the technology is being tested by health scientists to save more lives.

Introducing the smartphone App is part of the wider efforts by IHI to save thousands of women from deaths that occur during child birth, he said.

IHI has partnered with Bluetown – a company dedicated to providing internet services in unconnected, mostly rural areas – to assure connectivity.

Bluetown project manager Paul Kaiza said, “We’ve been working to connect remote locations with internet services in Mpwapwa and similar locations. We’re proud to be part of this great project intended to save lives.”

The App was created in 2012 with the support from the company, MSD for Mothers in collaboration with the University of Copenhagen and the University of Southern Denmark, and is also currently supported by The Bill and Melinda Gates Foundation.

In Tanzania, SDA project is supported by Danida and implemented by IHI in collaboration with the Maternity Foundation.

Each day, an estimated 550 women die in sub-Saharan Africa due to complications related to childbirth, data from World Health Organisation (WHO) show.

There is a critical shortage of skilled midwives in Tanzania. The latest Demographic and Health Survey (2010), shows that only 51 percent of deliveries are assisted by a trained professional and four midwives are available for 10,000 patients countrywide.

The Chief Nursing officer for Mpwapwa District, Rhobi Kenyunko says such an App would help bridge the knowledge gap by giving childbirth skills to other health workers who in normal circumstances assist skilled birth attendants during childbirth.

“Our district is short of skilled birth attendants. I hope that knowledge available in the App will help in creating a pool of medical staff knowledgeable of the basics of attending to mothers and newborns at childbirth,” she says.

IHI is currently undertaking a study at health centres in Mpwapwa District, Dodoma region, to test the App, before it’s rolled out in other centres in the country.

The project works with the Ministry of Health, Community Development, Gender, Elderly and Children, Presisent’s Office Regional Administration and Local Government and authorities charged with the overseeing the health sector in Mpwapwa.

Mpwapwa District Medical Officer Dr Said Mawji said that the project would help the district in addressing some of the challenges it encountered in avoiding deaths at childbirth caused by poor skills and knowledge.

“We’ll give researchers all the support they need to make the testing of the App a success,” says Dr. Mawji.

The App can be used in low and middle income countries and humanitarian settings as a tool to improve skills, knowledge and practice in a variety of ways determined by the need of existing health systems, programs, facilities and individual skilled birth attendants.

Tanzania: Documentary zooms in life of medical students at campus