Tanzania has the capacity to detect new variants of SARS CoV-2 but most of the country’s facilities and collective expertise remain unused, according to scientists.

This comes as Tanzania and its neighbouring countries face a surge in Coronavirus infections and deaths linked to new variants of the virus in the region’s third wave of COVID-19.

Molecular biologists from across East Africa who collaborated last year to explore the role of genomic sequencing in containing the COVID-19 pandemic in East Africa have said gaps still exist in the region, and suggested urgent action.

The analysis, published in May 2020, “still stands” as the region confronts the third wave of the disease, said co-author Dr Daniel Maeda, a molecular and cellular biologist from the University of Dar es-Salaam.

In May 2020, a team of molecular biologists working in East Africa published a report outlining how existing skills and technologies have been disregarded in the fight against the pandemic, something the authors found ‘disheartening.’

But the technologies, they said, ‘have not been put to good use in the fight against the pandemic’.

This echoes views of molecular biologist and General Secretary of Tanzania Society of Human Genetics, Mohamed Zahir Alimohamed, who this week told MedicoPRESS that bureaucracy inhibits Tanzania’s ability to identify new variants, despite being one of the continents ‘most advanced’ scientific nations.

Zahir Alimohamed said Tanzania harbours sequencing machines, trained scientists and “the willingness from the scientific community” to be able to identify new variants.

Knowing these variants, he said, is crucial in deciding with evidence which particular vaccine the country should consider, as well as helping to ensure hospital preparedness and plans for mass education programs.

“Tanzania has thus far been a unique nation in the way it has been affected by this pandemic.  It would be interesting to understand the whys and hows through such information generated by genome sequencing,” he said.

“The government should strengthen the national capacity in identifying SARS CoV-2 viral strains and other infectious pathogens circulating in the country,’’ said the committee’s nineteen-point report.

In March, foreign scientists claimed in a non-peer-reviewed paper submitted to World Health Organisation and regional bodies that a new COVID-19 variant of interest (VOI) had been found in three travellers arriving in Angola from Tanzania.

It was found to have developed 34 mutations, making it the most divergent form of the virus identified at the time the paper was published.

At the time, the paper’s authors pointed to the ‘largely undocumented’ progression of the pandemic in the source country, with co-author Dr Richard Lessells saying  “there was little information about Tanzania.” 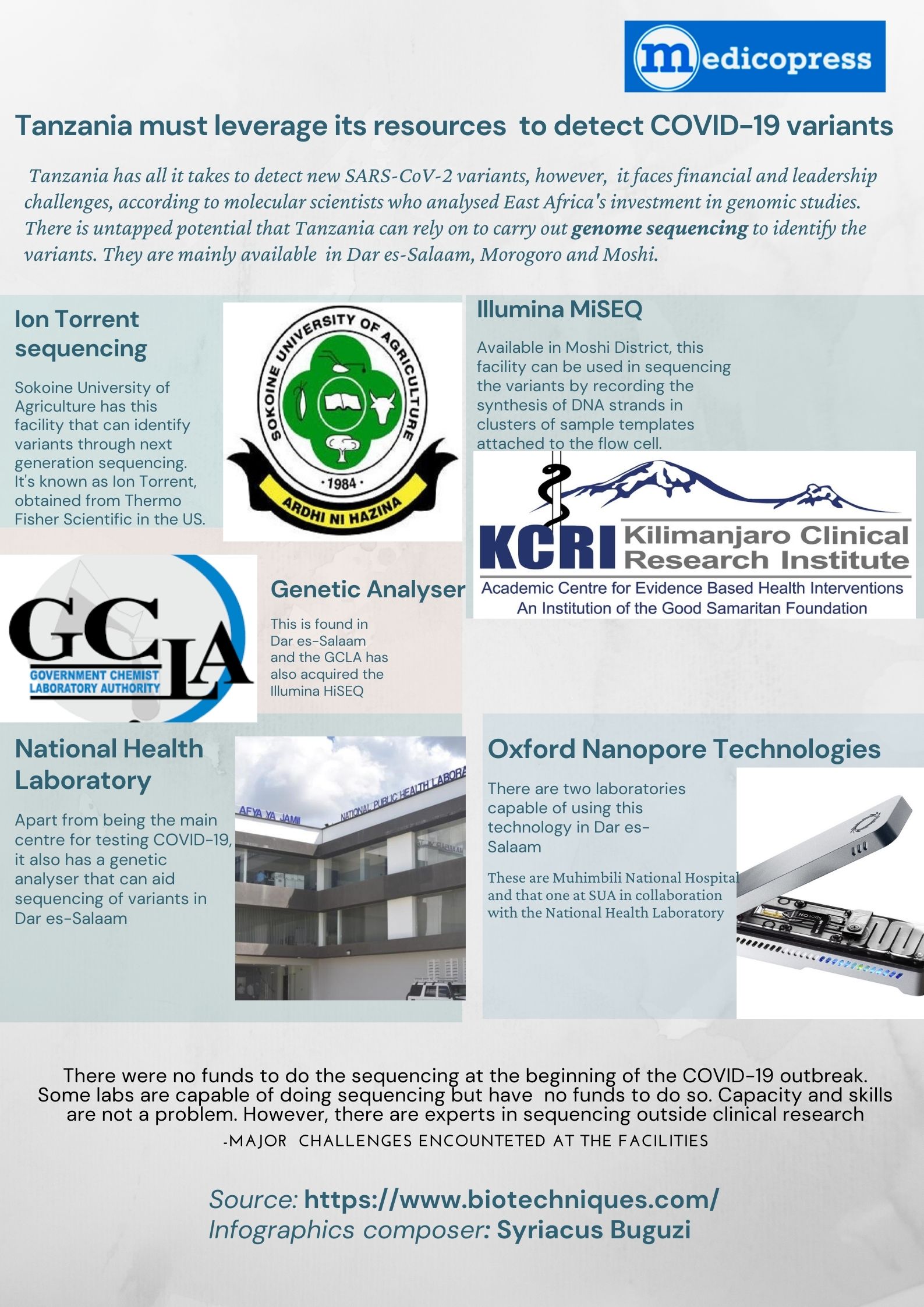 Then-President John Magufuli officially denied the existence of Coronavirus in the country and tightly controlled the flow of information on the subject.

By contrast, incoming President Hassan has promoted transparency and commissioned experts to identify potential steps in tackling the pandemic.

Awareness among policymakers was one of the key fronts needed to mount an effective pandemic response, according to the molecular biologists who authored last years’ report.

“There appears to be a lack of awareness among policy makers and/or not enough initiative from the local scientists working in this field to inform our policy makers about the importance of whole genome sequencing for management of COVID-19″ they stated.

On Tanzania, the authors reported, research and academic institutions possess the capacity and skills to sequence the viruses but still suffer from lack of funding.

In addition, they reported a mismatch between skills and tasks assigned to experts.

“It’s true that we have many people trained in sequencing, but some are outside government settings/employment and some of those who are in government employment are not in clinical research” they said.

Most sequencing initiatives in Tanzania, according to the authors, are led by foreign consortia from either Europe or North America.

This, they argue, could prompt a feeling among policy makers that such projects are not beneficial.

“We see there needs to be a clear link between the governments and local scientists to work on the same matters from different perspectives,” they wrote, suggesting further measures that can be taken to boost investment in genomic sequencing in Tanzania and the East Africa region in general.